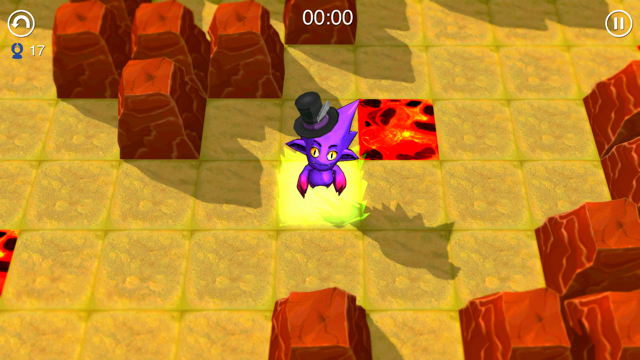 Android gamers are in for a brand new conundrum with the launch of Chuck’s Challenge 3D Ultra 2016. This latest incarnation of the puzzle franchise is being developed by game studio Niffler. A team of 16 has been working on the game cross the U.S., UK, and Costa Rica.

It’s the latest incarnation of a game Chuck Sommerville introduced to the world a quarter century ago. And fans keep asking for more. Barn Cleave, executive director of Niffler, explains what the new Android and NVIDIA versions of the game introduces in this exclusive interview.

What were your goals heading into Chuck's Challenge originally?

Chuck Sommerville created Chip’s Challenge over 25 years ago. When Chip’s Challenge was released on the PC, it was one of the first games ever to be modded. People wanted to create as well as play it. Over the last two decades, Chuck has been supporting the community to make new content.

Chuck’s Challenge is our answer to what happens if you take the game principles of Chip’s Challenge and mix them with today’s technology and ideas such as 3D graphics, cloud sharing, and cross platform play.

Can you talk about Woop, Snappy and the other characters in this game from a gameplay perspective?

Woop is the purple playable character. The challenge is woking out how all the other characters (Woop’s pets) interact with each other to help Woop solve each level.

How have you seen players connect with this game across platforms?

The platform that supports all our puzzles games has over 10 million players sharing hundreds of thousands of levels across desktop and mobile.

How are you enhancing this game for the NVIDIA release?

What’s new with the gameplay experience?

A new dropdown search menu has been added that has two extra search filters: Hardest Levels and all the past Weekly Puzzles. Plus, the search results now show if you played the level by displaying what medal you got for it.

A number of updates have been added, including showing your current and best times, how many Undos you used, and most importantly how close you are to getting a better medal via the Medal Power Bar.

What’s in the Flummery bundle?

Flummery has loads of new content including: a tougher set of 25 levels with a new background, the ability to earn two hats, 12 game elements with seven additional game elements and five new pets, and three new music tracks.

What has the new game engine opened up?

Chuck Sommerville and the team have rebuilt from scratch the Chuck’s Challenge 3D game engine adding hundreds of new improvements and features. Hints are now uploaded along with the user-generated levels, allowing players to watch in-game how the original creator completed the level. Enhanced Graphics with updated models and new graphically effects that take advantages of the latest Unity 3D features making everything looks super smooth; including character animations and a new psychedelic undo effect. New controls allows Woop to understand his surrounding, helping players to get even better times by moving diagonally while also avoiding walls.

What did the new game engine open up from a visual and graphics perspective?

The new engine takes advantages of the latest Unity 3D features, making everything look super smooth; including character animations and a new psychedelic undo effect. The old game engine used to work out both the puzzle logic and on screen animations for each character and object individually one by one. In the new game engine all the characters and objects work together. We can do this because we’ve split the game engine in two. One part works out all the puzzle logic, while the other part works out how everything should be rendered on screen. The rendering is done by Unity, as that's what it’s good at, allowing us to refine the puzzle logic side.

How have you improved the music and sound in this game?

What are the challenges of creating engaging puzzle games today in such a crowded market?

Balancing difficulty. Make a game too easy and the hardcore players don’t find it challenging. Make it too hard and the casual players leave because it's too tough. That’s why we've unlocked the start of each bundle, so you can choose to start with easy, medium, hard, or tough levels.

How do you feel you're pushing things forward with this game?

Initially Chuck’s Challenge 3D seems to be about playing through a series of puzzles. But actually it’s about learning the mechanics of gameplay. Slowly the player can become the creator, making the game more than just a passive experience, but a creative one as well.

What does your game open up for aspiring game developers?

We think coding is important, but it’s not necessarily the best entry point for everyone who wants to learn how to make video games. Too often we hear people telling potential game designers to get into gaming they must learn how to code first.

That’s why we’ve created a paint style interface that allows anyone to make complex logic puzzle, skill dodging levels, or just simple fun mazes. They can get a taste of what it’s like to be a game designer by seeing their ideas coming to life. We hope our game is a stepping stone that attracts new talent to the games industry, by giving people the tools to create games and then the thirst to expand on what they have learned.

How have you worked with NVIDIA on your game?

NVIDIA helped us blur the lines between what is possible on mobile versus desktop gaming.

What are your thoughts on the evolution of Android as a platform?

We remember publishing mobile games before Android. You had to talk to each mobile phone operator in each country. They’d ask you to make special builds for each and every one of the handset ranges they sold. This meant you had to make hundreds of different versions of the same game. This was not only dull, but painfully to maintain. We’re glad that’s over.

What excites you about Android TV?

New players with new ideas. There’s a belief that most players have access to a desktop and/or console, but this is not the case in emerging countries such as Africa and Asia. We are looking forward to seeing what the next billion players do.

What impact do you think NVIDIA Shield Android TV could have within the gaming ecosystem?

The NVIDIA Shield TV delivers desktop gaming for mobile gamers, giving mobile players the best of both worlds by having access to their current mobile library while also expanding it with desktop titles.

What do you see NVIDIA Shield Android TV opening up for game developers moving forward?

Porting games from desktop to mobile typically means the developer has to cut content, but the NVIDIA Shield Android TV is dispelling this.

How does your game take advantage of NVIDIA Shield Android TV’s functionality?

Having more GPU power gives us the freedom to include all the desktop features that normally couldn’t be included on mobile.

How was it adding controller support to your game?

We designed Chuck’s Challenge 3D for any screen size and any player input. This included controllers, which I think works the best, particularly with a digital pad. As that’s the closest to the original Atari Lynx input used for Chip’s Challenge.

What impact has Tegra X1 technology had on the gameplay experience Shield Android TV users will have (any specifics would be great)?

Tegra X1 players will be able to crank all the video setting up to the max. They’ll be able to play the Chuck’s Challenge Ultra 2016 with the video quality set to fantastic and mini-blur turned on.