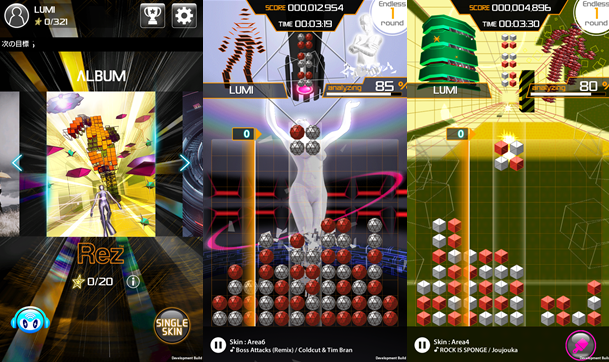 Lumines Puzzle & Music is an excellent mobile riff on the original PSP puzzler Lumines, and if you've been playing it since its September release you're likely already in the know. If you had decided to put it aside for a bit to focus on other games for a bit, there's a great reason to go back to it, even if just for a moment, because there's a Rez track pack incoming!

It makes sense, you know, because Tetsuya Mizuguchi was involved in the creation of both games: Lumines and Rez. The Rez album pack is releasing on November 21st for your downloading pleasure, with several of its excellent tracks available for puzzling excitement in the whole of Lumines Puzzle & Music.

If you haven't played either game just yet, I highly recommend that you remedy that mistake as soon as humanly possible, especially since both are some of the greatest music and puzzle games out there (and rail shooter as far as Rez is concerned.) Don't miss them, and make sure you download the Rez pack when it launches next week for some prime Thanksgiving gaming!