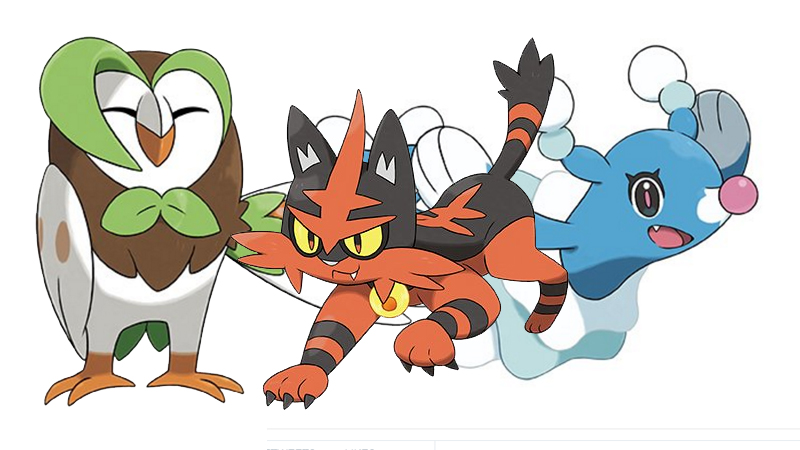 Which Starter Should You Choose in Pokemon Sun and Moon?

It's a question as old as time: Which Starter Pokemon should you choose in Pokemon Sun and Moon? After all, it's going to end up being your closest companion throughout the game, so you'd better make it count. Not only that, but it's going to propel you through the first few challenges as you make your way toward completing the game.

It's an important decision, so make sure you're informed before you get to the point in Pokemon Sun and Moon and have to figure out which friend you're going to make for the remainder of your time within Alola.

Rowlet is a Grass starter that will evolve into Dartrix at Level 17 and Decidueye at Level 34. Rowlet is Grass/Flying, Dartrix is Grass/Flying, but then Decidueye transforms into a Grass/Ghost type when it finally makes its appearance, which is an interesting change from the usual starters we've seen throughout Pokemon over the years.

It's not recommended that you begin with Rowlet if you're a player looking for higher base speed, plus the fact that its ultimate evolution Decidueye is unable to learn moves like Leech Seed to provide additional support that other Grass Pokemon are capable of learning. Decidueye, however, can learn moves like Leafage, which features 100% Accuracy and Spirit Shackle, which can essentially pin Pokemon to the ground so that they can't escape -- it's also an attack, and it cuts like a knife. You can also utilize the Long Reach ability which allows your Rowlet and various evolutions to attack without actually making contact with the opponent. This means you could potentially miss out on status effects brought on by abilities.

Choose Rowlet and its evolutionary family only if you're looking for a challenge. It's not recommended for your first playthrough unless you want to work a little harder with the special challenges.

Obviously the Fire family is easy enough to start with, as little Litten evolves into Torracat at level 17 and into Incineroar at level 34. Unlike Rowlet and the rest of the grass evolutions, these Fire starters (Prodigy, look out!) pack a solidly high Attack stat and fantastic moves that keep your opponent's Pokemon at bay while yours absorbs damage and deals it out just the same. Interestingly enough, all of Litten's evolutions except Incineroar are simply Fire Pokemon, with Incineroar flying the Fire/Dark banner.

The Darkest Lariat move and Throat Chop are more reminiscent of Fighting moves, and they don't hold back as far as damage is concerned. They're both Dark/Physical moves, and they hit hard. Not to mention the Brutal Swing attack you can teach your cuddly little kitty who isn't so cuddly after all. It's one of the nastiest-sounding swings in the game, so it really turns out these Pokemon may have more in common with Pokemon like Machamp and others of that ilk.

You can propel yourself through a good part of the game if you decide to go with Litten at first, though you may run into some issues when it comes time to take out other Fire Pokemon. This would be a great choice, however, for anyone just getting into Pokemon in general and looking for some solid offensive moves.

The Water starter family beginning with Popplio is a powerful set that offers lower speed than the rest of the starters, but makes up for it with high Special Attack and Special Defense stats. Popplio and Brionne are normal Water types, but when Primarina comes along it gains a Fairy type. That leaves the evolutionary line open to some interesting surprises. Popplio evolves into Brionne at level 17 and from Brionne into Primarina at level 34.

There's an extremely helpful move in the form of Sparkling Aura, which will heal any Pokemon that's been burned, making it a great spoil for an opponent who's gone the Fire route, namely your rival in Pokemon Sun and Moon. Popplio also possesses an ability called Liquid Voice, which turns any sound-based moves into Water-type moves. This is a boon for later stages in the game, when you'll be able to turn even "lesser" moves that you weren't sure you had a use for into more powerful options.

Popplio is a formidable opponent early on in the game if you need to outclass your rival and first few challenges, it's a solid choice.