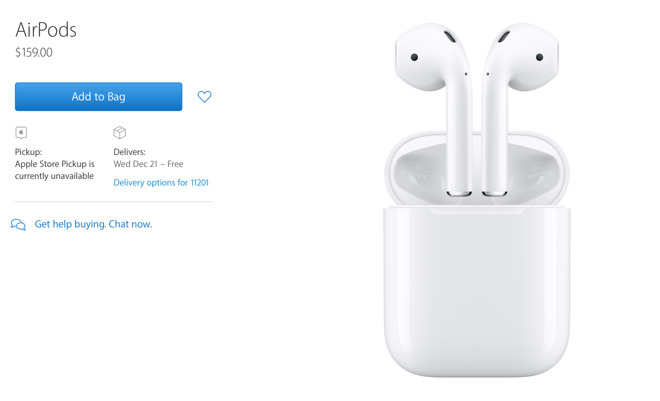 It's been a long time coming, but Apple's AirPods are finally available for purchase via Apple's website for $159. You can go ahead and put your order in now, but it looks like there's very low availability for the item -- as if anyone is actually surprised at that revelation.

Those who have completed some of the first orders on the site had previously been notified that their purchases would arrive a bit ahead of Christmas, though if you're banking getting one of them in person at an Apple Store, you're probably out of luck. According to AppleInsider, a very scant amount of product was delivered to few stores, with several not even expecting stock to arrive until January.

And as it stands now, the Apple site notes that any orders made now won't actually be shipping until four weeks from now, meaning getting your orders before Christmas isn't going to be a thing. Looks like if you were planning on giving the AirPods as a gift, you might want to throw a picture of them inside a holiday card and advise your giftee of what's going on with the situation.

None of this particularly enlightening or surprising given the immense popularity of Apple items like these, especially ones that weren't going to be released for some time. If you're looking to get a pair, you might want to go ahead and lock one in, just in case the waiting time expands even further beyond four weeks -- and if Apple products are any indication, it seems they almost certainly will.