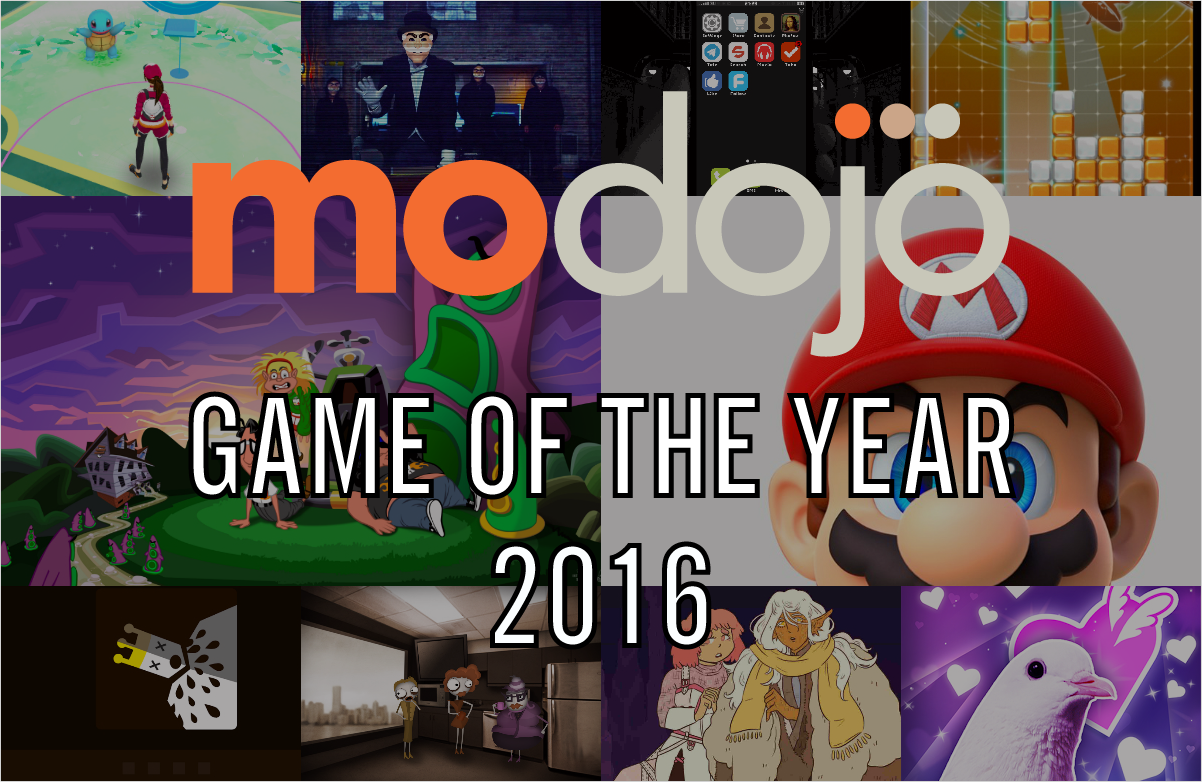 Ten Mo: The 10 Best Mobile Games of the Year

We finally made it. We've reached the end of 2016, and 2017 is shaping up to be another amazing year for gaming. This year was too good to us already, giving us some amazing mobile titles across the spectrum. Extremely popular franchises like Pokemon and Mario got their own mobile adaptations, and audiences flocked to them like a moth to a flame. Old favorites were reborn anew. There were some extremely clever products thrown into the mix as well.

We were finally able to distill all of the great mobile games we played this year into one list, and this is our end of 2016 Ten Mo collection of the best mobile games of the year. You may be surprised to find which one took the cake!

You've probably already played it, and we're not telling you anything new but the "hardcore pigeon dating sim" Hatoful Boyfriend is just as zany and entertaining on mobile as it is with its desktop and console releases. Originally pushed out in 2011, it became a cult following among visual novel enthusiasts (such as yours truly), and it received a remake for a brand new audience -- now no more scrambling for the limited Japanese release!

You play the only human in St. PigeoNation's school for birds, where you'll manage your own school schedule while pursuing several gorgeous pigeons that all want to be your one and only. Like any self-respecting visual novel/dating sim, there are multiple branching paths to take so you can make sure you end up with the pigeon that's right for you. It's perfect for playing on the go, as you'll soon find out when you dig in.

I'm a big visual novel fan, and Rose of Winter was easily one of the most gorgeous and poignant ones I had played all year. Its unique illustrations, believable characters and sharp dialogue made it a shoo-in for this Game of the Year list, even if it didn't start out as a strictly iOS/Android original.

To complete these tasks, you’ll have to learn a simple visual programming language that gets progressively more complicated as you complete more levels of the game. By utilizing the language correctly you move the documents from one conveyor belt to the other in the order specified. This clever way of making programming into a puzzle makes coding seem fun and is sure to inspire those who play it into learning more about real-world applications for coding. Human Resource Machine was one of the mobile best games of 2016 because of its cute world design, clean, intuitive user interface, and because it taught us about valuable coding skills without making us realize we weren’t just playing a game.

If you mix Tinder with dynastic kingdom building, you get Reigns. This quirky title from Devolver Digital presents you with choices from your royal advisors. When they give you advice, you can choose to swipe the card displaying it to the right to accept their suggestion or swipe it to the left to reject it.

In Reigns you’ll eventually die, that’s okay though because you’ll get to live on as the next King. The charming humor, simple gameplay, and intriguing plot make Reigns one of our favorite mobile games of the year.

If there’s one rival to Tetris when it comes to block-based puzzle games, the Lumines series is it. Combining amazing music tracks with addictive block puzzles, Lumines Puzzle & Music brings the iconic series to iOS and Android. Not only do you get a whole new soundtrack, but you can also download the music from the iconic original Lumines. You can also pay for the ability to play entirely new puzzles played to the Rez soundtrack.

The Lumines series started on PSP, and so the concept lends itself well to handheld gaming. We love Lumines Puzzle & Music’s option to bring in new soundtracks for play, and this expandability makes it the definitive version of the game. If you love rhythm or puzzle games, then like us, Lumines Puzzle & Music will be one of your favorite games of 2016.

Replica is a harrowing picture of an overbearing government that uses its surveillance powers for some very unsavory practices. It's one of the best "smartphone" simulator games out there on the market, and features a heady storyline that has you questioning the government's true intentions.

Its ability to test whether you're a "true patriot," as the game says, or in it to make sure the real victims are saved from the oppressive dystopian government is spot-on. Multiple endings ensure replayability. It's an excellent play for about an hour of your time.

It was one of the most engrossing mobile games I spent time with over the year by far. Basically, the game finds you happening upon a phone someone dropped on the sidewalk, and happen into being a part of the "E Corp" messaging platform, where the game plays out through fake planned messages sent via the game in the E Corp Messaging App. You'll find out who the phone previously belonged to and find yourself entangled within a dark world of hacking and "fsociety."

Pokémon Go took the world by storm this summer, and the unique gameplay makes it one of the most ambitious mobile titles to date. The title is significant in that unlike most games; it requires players actually to get up and go find Pokémon to catch. It’s great to see a title that encourages and rewards players for being physically active, and Pokémon Go is a blast for players of all ages.

New Pokémon and features continue to make their way into Pokémon Go via regular updates, and with how successful the title has been it’s sure to be supported for years to come. An additional feature that sets Pokémon Go apart from other mobile games is the use of augmented reality to make it seem like the Pokémon you’re trying to catch on-screen are right in front of you. We loved to see this unique new aspect to mobile gaming and can’t wait to experience the AR technology as it’s further refined.

Super Mario Run is Nintendo’s first big push with in-house mobile development. Even though there’s been some criticism concerning it’s one-time $9.99 fee, with some mobile gamers considering that price too high, the game’s done great in the few weeks since its release.

Collecting coins and Toads is a blast in Super Mario Run, and we love the fresh take on the endless runner genre. The graphics are crisp, the characters are iconic, and the game has a polish and style that is almost unraveled when it comes to iOS titles. Super Mario Run has made a stamp on mobile gaming and regardless of any qualms with Nintendo’s pricing decisions, the title managed to become one of the most popular Apple App Store apps this year even though it was just released on December 15.

1. Day of the Tentacle Remastered

Day of the Tentacle is one of my favorite games of all time. I’ve even got a tattoo of the maniacal Purple Tentacle. Why? It made me laugh. Sure, plenty of point-and-click adventurers gave that luxury back in the LucasArts heyday, but how often does a game give you a hearty chuckle these days? You say “plenty,” and I say “not often enough.”

The Maniac Mansion series has never taken issue with poking fun at itself, and this truly resonated with me. LaVerne’s hilarious and quizzical one-liners, Hoagie’s stereotypical “rocker” persona, and Bernard’s awkward timing were things that stayed with me year after year. It was one of the first adventures my father enjoyed alongside me. With every trip to the desktop for the UHS to find out how to solve the next puzzle, every Swiss bank account I couldn’t figure out a use for, and every frozen hamster, I fell more and more in love. When it finally landed on a mobile device I knew it was going to be my game of the year, every year. And thus, it's Modojo's 2016 Game of the Year.

Am I upstairs? I got lost.

Entei, Raikou, and Suicine can now be found in different areas around the world.