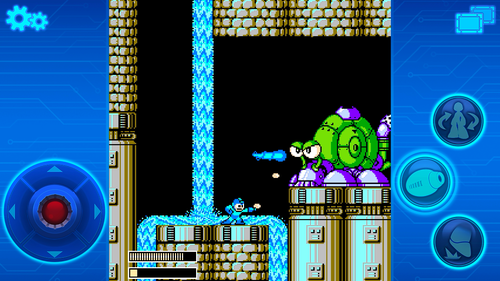 The idea of the classic Mega Man games on mobile devices is a good idea. However, how Capcom went about producing these games left a lot to be desired. By the looks of things Capcom is at least making an effort to make these mobile games better.

The controls are still “iffy” and that’s a nice way of putting it but the update is adding a Boss Rush mode to all six mobile games. Think of it as taking care of all the Robot Masters before Dr. Wily without playing any of the game. You get all the Robot Master weapons and you have to defeat them all, but in a random order. Beat them and then you do it all again, only the fight will be tougher than the first and so on.

The bigger update would have been making these games cost nothing until all the issues were fixed but like I said, this mode is a nice add-on. If the controls get fixed and all the processing issues get updated, then you might have something here. However, until that day comes, you’re probably better off getting your Nintendo to work and playing the classic Mega Man games at home.

Though exclusive to Japan, North American players can still get a taste for the series' latest iteration.

Players can expect to find some of Marth and Arthur's signature gear popping up on their 3DS.

The classic 2D fighter will return this Summer, with some new bells and whistles.

Time to get your Mega Man on in the new year!