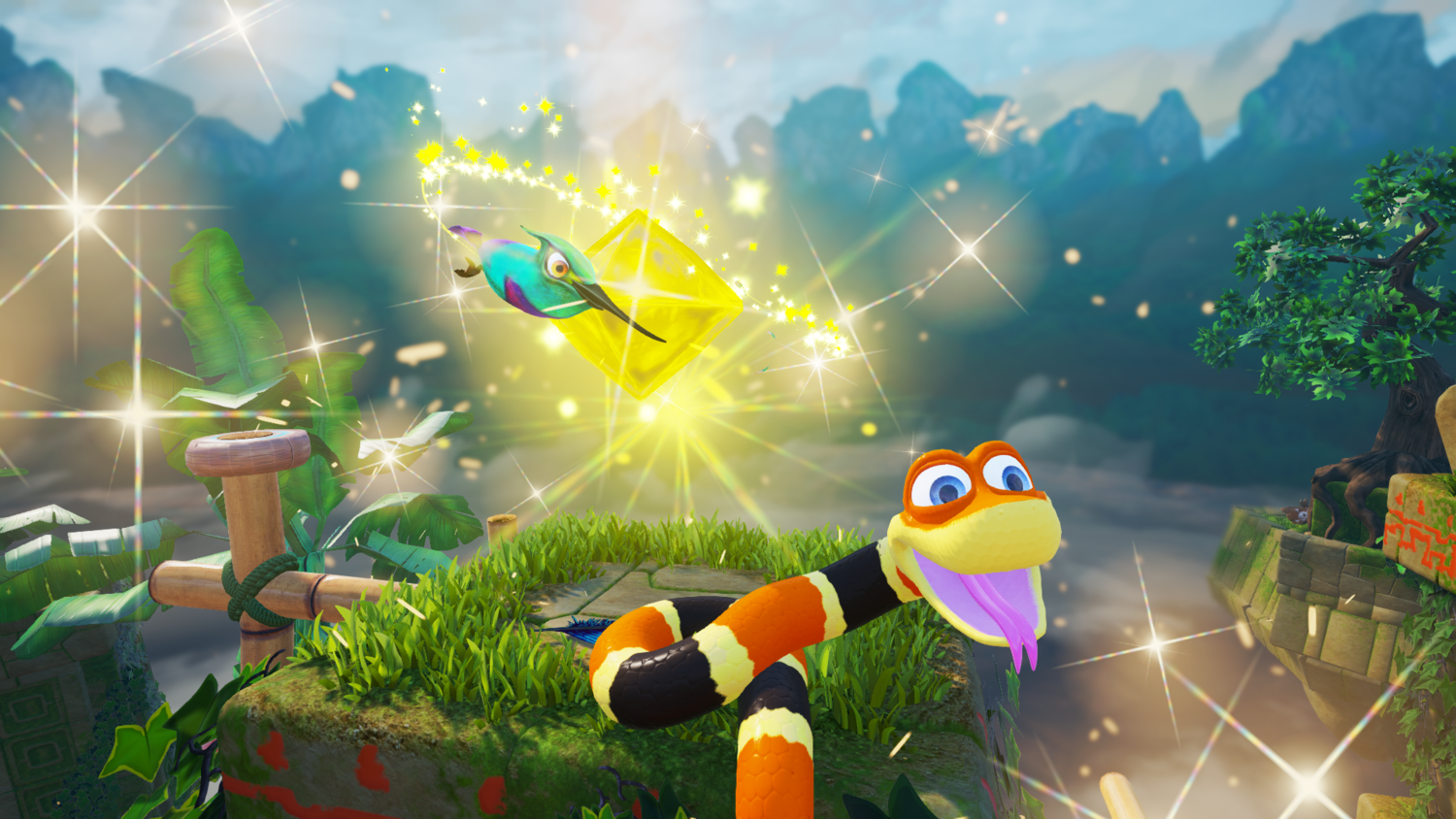 This winter I was fortunate enough to attend PAX East up in Boston and was one of the lucky souls not to get snowed in. This was my first PAX East, and it was interesting to say the least. One major thing that I took away from the convention was how much bigger it is than conventions like E3. There was so much shown off there by way of board games and video games, one of which was a quirky, puzzle-platfomer title from Sumo Digital starring a snake and a hummingbird called Snake Pass.

Without giving away too much of the story, it’s up to you, playing as both Noodle the Snake and Doodle the Hummingbird, as they try to stop a mysterious foe from taking over Harmony Foothills. You’ll need to master the game's "snake physics" if you want any chance at achieving your goal.

The team at Sumo created the term “Snake Physics” basically for the controls/Noodle moves. During the first few levels, you get the tutorial of how to play Snake Pass. You will need to hold Zr on the Nintendo Switch Pro Controller to allow Noodle to move as well as move the control stick to slither back and forth. Slithering back and forth will create speed. You might need to get a lot of speed going if you need to climb something tall of steep. You can also keep your head up, something I recommend doing all the time since that will help you move and climb better.

To traverse the levels you will need to climb different bamboo towers and stone pillars. If you’re having trouble climbing up things, you can tighten your grip. Tightening your grip allows you to rotate around bamboo. This method make it’s much easier to climb because you can hang on bamboo. In addition to tightening your grip, Doodle can grab your tail and hold you up, creating a floating like atmosphere. This might be the difference between falling off the level and restarting at the checkpoint.

If that happens, you’ll lose everything you didn’t have before you got there, typical checkpoint etiquette. However, there were times that Doodle was called and it didn’t grab the tail so if you need it, make sure it’s holding you before you attempt anything. Also, this isn’t a failsafe; you will still fall if you don’t protect yourself so make sure you grab something tightly. Doodle reminds me of Navi from Legend of Zelda: Ocarina of Time because it constantly gives you hints in the level and tells you how to do things. If that doesn’t sound like Navi, I don’t know what does?

There are four stages to play in each realm of the game, fifteen stages total. There are 20 blue orbs to collect, strewn about in each stage as well as 3 keystones. The collection animation is fun because Noodle eats the orb and you see it going through his long body. The keystones are needed to advance to the next stage in the game by opening/activating the gates at the end of the stage. Look for the beacon shining off the keystone in the level to locate it; it could be really tough to get to.

You will need to use all of your snake wisdom to find all the keystones in each stage/level. There is one more object to find in the stage and those are Gatekeeper Coins. The Gatekeeper Coins are the hardest things to locate in the game and there are 5 in each stage of the game. These could be anywhere in the level. They could be on a pillar; they could be hanging over a cliff, underwater, like I said anywhere!

The controls are innovative but a huge hassle to learn and get used to.  Sumo Digital calls the controls “Snake Physics” but they just seem over-complicated at times. You need to hold down the Zr button to move at all times during gameplay and slither from side-to-side. This will generate movement and get you going but it felt forced to me at times. There were times where no matter how much side-to-side sliding I did, I didn’t generate that much speed. Having to control Noodle this way in my opinion slowed things down during gameplay. Having a mechanic that relies on speed such as climbing/moving and then having a flawed control in charge of it is not the greatest design scheme in the world.

There are ways around mastering the Snake Physics and one way is by putting Noodle’s Head up and twirling twice. I found this method gave me a quick “jump up” similar to climbing. I would also recommend learning how to tighten your grip on things quickly so you don’t fall nearly as much while playing. In addition to that, you can climb up the bamboo easier with a tighten grip. You’ll also have the ability to swim and the controls get even more problematic around that. You can dive deeper or swim toward the surface but you need to press the Zr button to move as well as the button the dive or surface. There are times where you need to press three and four buttons at a time during a segment of gameplay.

There is also the issue of the camera. The camera is not the greatest camera and a puzzle-plat former game needs a perfect camera so you can see what you’re doing. Snake Pass doesn’t have that perfect camera. There are times where the camera stays with you and then there are times where the camera goes wherever it wants. You need to be able to see what’s ahead/behind you and a lax camera or non-tight controls hurts the game.

Snake Pass takes some risks and they pay off like being able to push boulders with your face/head into holes to activate switches. There is another mechanic that allows you to wrap yourself around switches to activate them by pulling them in a specific direction. Doodle being able to grab your tail is another great idea because he can help you grab a ledge if you think you’re going to fall. The unreal 4 Engine makes it look fantastic and the soundtrack sounds great. However when you play, the controls will need a lot of practice/mastering. Puzzle plat forming games need tight controls and a good camera and Snake Pass unfortunately doesn’t have either.