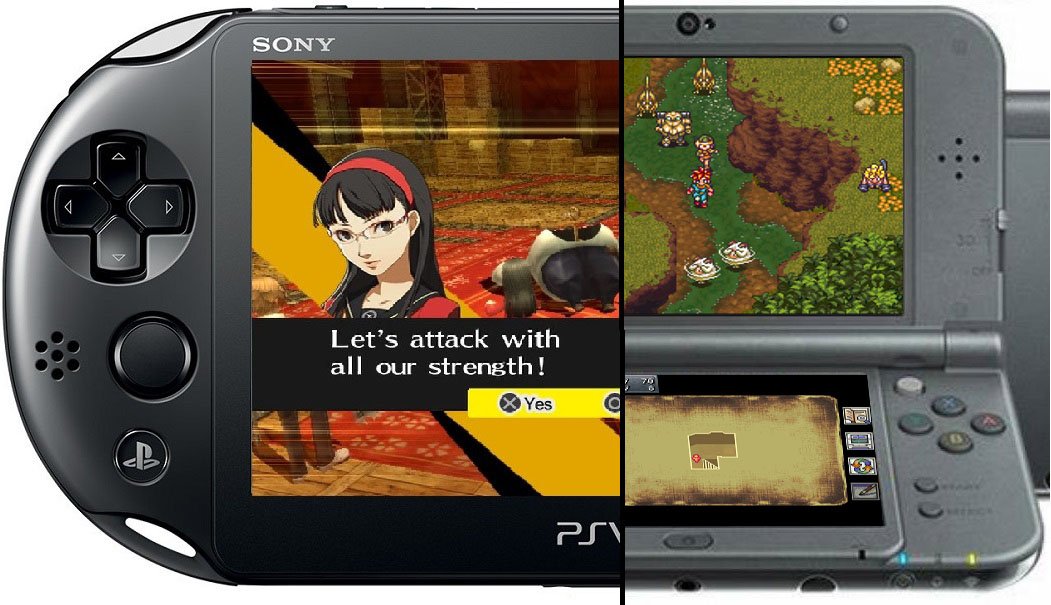 In a way, it seems odd for RPGs to fit so well onto handheld platforms. Devices like these are often associated with games that you can play in a bunch of small spurts, not necessarily long form adventures. And yet, the more time passes, the more big RPGs we see pop up on our portable consoles, from the simple and friendly Pokemon series to the dark and challenging Shin Megami Tensei titles. With that in mind, let's look at some of the best handheld RPGs around. The only qualifier needed here is that it be an RPG and that it be available on a modern portable platform.

There was a period where the future of Dragon Quest in the West seemed unsure. We got Game Boy Color renditions of the original trilogy, culminating in the excellent Dragon Quest III, but then we saw nothing of the main series again until VII on the PS1, and even that drew very little attention. It was Dragon Quest VIII on the PS2 that showed West the majesty of this famous Japanese series, and its success ensured that we finally got the three titles we had missed out on.

This was a big moment, because it meant that English speaking JRPG fans could finally play arguably the best entry in the series, Dragon Quest V. This entry is more than your typical “travel the land, make some friends, save the world” shtick. Don't get me wrong, it's got all that too, but it also has you collecting monster buddies, choosing a wife, settling down, and — most importantly — actually growing up over the course of the game, eventually adventuring with your kids. All of this was originally a SNES title, but you can play it in its prettied up splendor on the DS.

Pokemon Red and Blue were instant classics and started a worldwide phenomenon that persists to this day, but Gold and Silver are still hailed by many as the prime example of Pokemon. If you've played this generation in its entirety, then you'll undoubtedly see why. Gold and Silver weren't just more of the same, they added a full new cast of monsters to catch, a night and day cycle that had impact, and included the entire first region as a bonus for beating the game. Talk about value. It may not have featured Blastoise, the best starter evolution of all time, but it did have a big alligator, which is pretty cool in its own right. (Taken from our Best of Game Boy and Game Boy Color Games list)

It's all that in a prettier layout with the ability to have any of your pokemon follow you around as you go out on your pokemon adventure. What's not to love?

Persona 4 isn't just one of the best handheld RPGs, it's one of the best period. Live the life of a high schooler who has been forced to move to his uncle's place in a small town, attending a new school. You'll make friends, uncover a deadly mystery, and venture into a crazy world that twists people's hearts and shows what they've really been feeling deep down inside.

For a game that is undoubtedly “anime” as hell, Persona 4 is surprisingly real, which is what makes it shine. As you make friends, you learn about them, even the things they wouldn't choose to share with anyone. They have real emotions and face very real problems, from a guy whose masculinity is called into question to a girl who isn't sure she fits the mold of a girl at all. It's a game that had a very real impact on me, and one I highly recommend to anyone with access to it.

Final Fantasy IV was the JRPG giant's first real move into proper dramatic storytelling. It's a game that has a focus on the story it seeks to tell and the characters who make it up, rather than simply asking you to go save the land because that's what's expected of you. It has a colorful cast of characters who can be swapped out at any moment on the whims of the plot, and has your protagonist face himself and the dark things he's done, wondering if he's even worthy of saving those around him.

While originally a SNES title, you actually have two separate ways to play it now. You could play the DS entry, which remade the game in 3D, but I would personally recommend the PSP release. This version keeps the 2D look of the original, but revamps the visuals with beautiful new pixel art that is so good that I'm still angry all these years later that we never got a FFVI made in its style.

The Ys series has never commanded much admiration or even recognition in the West, but it's one that I've had a big soft spot for over the years. Outside of the first couple of entries and their prequel, Ys Origins, these titles are largely standalone. Each will have little throwbacks to the rest of the series for long time fans, but prior knowledge is rarely necessary. They simply tell of the many journeys of adventurer Adol Christin.

Memories of Celceta sees Adol wander out of an expansive and labyrinthine forest devoid of his memories. Rather than let this hold him back, the fiery adventurer picks up a friend and heads back into the trees, eager to not only regain his sense of self, but explore this crazy land all over again. It builds on the base that Ys Seven provided, swapping between three different characters in the heat of battle to wreck anything that gets in the way of your exploration.

Final Fantasy Tactics: The War of the Lions (PSP)

Final Fantasy Tactics holds a place in many people's hearts that few games could ever hope to challenge. It wasn't the first game of its kind, with Tactics Ogre having already laid the groundwork before it, but the addition of Final Fantasy elements and an incredibly intricate plot of politics and misshapen history turned it into a classic that people still yearn for more of.

To quote our Best PSP Games list, “More than a simple port of Squaresoft's 1997 tactical RPG, The War of the Lions offered a fully-updated take on the game, including new cutscenes, additional characters, new job classes, additional episodes, a fresh translation, and a new widescreen presentation. The result was a game that retained all of the original's depth of gameplay and improved upon or fixed each of the original's problems. The fact that it did so in a portable format was just icing on the cake.”

Many RPGs have come and gone in the decades since Chrono Trigger's original release, but none have ever managed to capture the same timeless magic. The team that created this masterpiece were called the Dream Team, and they damn well deserved that title. Made up of not just Square's Final Fantasy alumni, but even the talent behind then rival company Enix's Dragon Quest series, there wasn't much more that could have been done to ensure Chrono Trigger's success, outside of sacrificing some animals and a whole lot of prayer.

Chrono Trigger sees silent but courageous hero Crono travel across the span of time to stop an evil being known as Lavos from destroying the world. They visit the middle ages, the robot-filled future, and even the stone age, where the amazonian Ayla whoops dinosaurs with her bare hands. Chrono Trigger isn't just a phenomenal story with immense charm and wonderful characters, it's also fantastically made. This is a JRPG that can be 100%'d in under 30 hours, and never forces you to grind to progress. Simply fighting everything that dares get in your way from point A to point B sufficiently powers you up for what lies in store. Its great twist on ATB combat and its many story elements that aren't required of you and yet can shape the course of the world only further cement Chrono Trigger's place as one of the best games ever made.