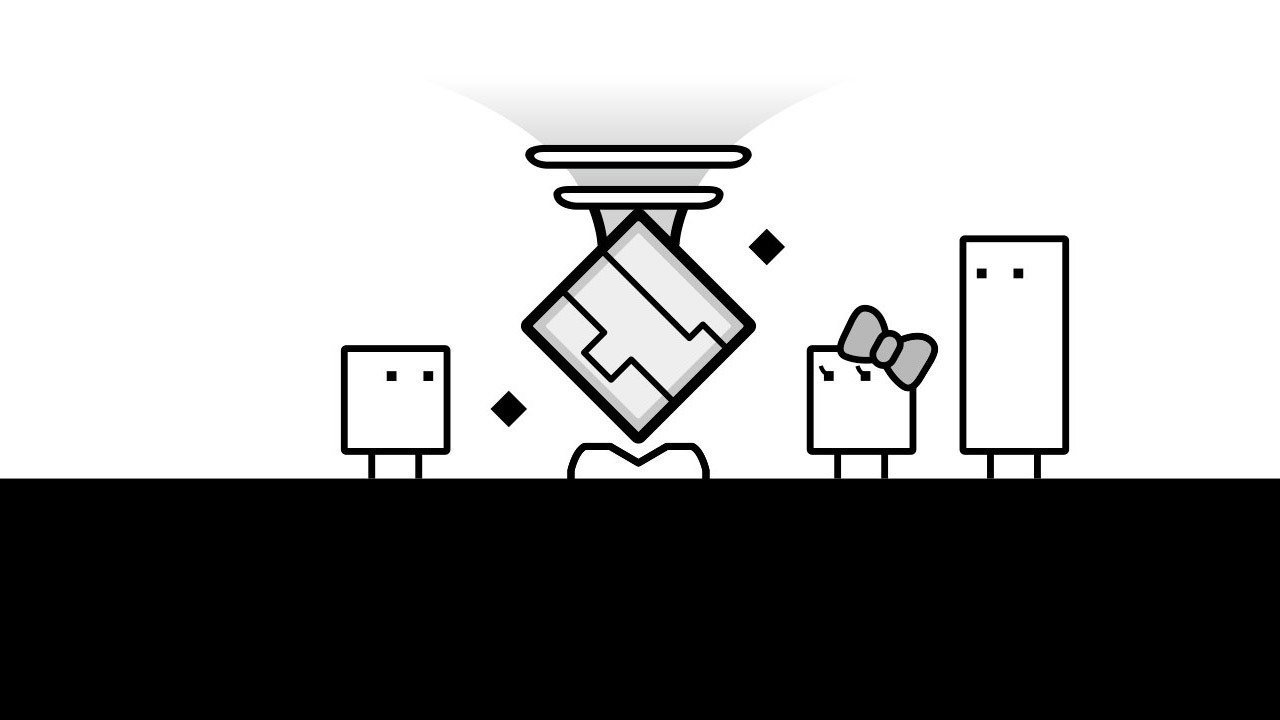 BoxBoy might not be one of the most familiar names across Nintendo systems, but perhaps it should be. The series — or trilogy, as of this release — is both clever and pleasant, providing simple, approachable gameplay in a clean and inexpensive package. The latest and likely last title in the series, Bye-Bye BoxBoy, sees familiar protagonist Qbby engaging in simple puzzle-based platforming across three different planets in his attempt to remove the dark, bubbling corruption within.

Though there is certainly a hint of story to be found within Bye-Bye BoxBoy, the why behind the action is secondary to the how. Players are basically dropped straight onto a starship, and from there can head off to a connected series of linear puzzles. Like the game's action, the story is straightforward and unobtrusive, providing the needed motivation and little else otherwise. That's a good thing, though, as Bye-Bye BoxBoy is a simple game with a surprising depth, and its soothing nature is second only to the pleasing manageability of the game's challenges.

For those unfamiliar with the protagonist and his abilities, Qbby has the unique power of being able to spawn a number of boxes that can be used to traverse areas and gather crowns, the optional collectibles floating around each level. The boxes branch off of Qbby himself, allowing him to build and then detach shapes that act as staircases or ledges as well as create box lengths that allow him to snake across gaps and activate switches.

The number of boxes that can be spawned is restricted on a per-level basis, and this limitation has a purpose: all available areas can be solved with a specific number of boxes, and it's up to players to figure out how to get through with consideration to those pre-defined limitations. Players also have a set number of boxes they can use per level; however, at any given time, pressing both L and R together will respawn Qbby at the last checkpoint, which will reset the box counter.

Overall, the game's puzzling leans heavily toward the less-challenging end of the spectrum. This isn't a hard game, not even close, but its lack of difficulty and uncomplicated visual style combine to give off a remarkably soft, approachable vibe. Like other games in the series, this isn't a title to be stormed through, nor is it something people will play for the characters or story; instead, it's a quick and calming bit of action that easily fills ten-minute or even two-hour gaps throughout the day.

Soon after the first couple of levels are completed, Bye-Bye BoxBoy really starts to open up. Levels begin introducing more and more complex goals, including escort missions with the helpful little square Qbaby as well as environmental modifiers like electrical beams or persistent gusts of wind. Each of the areas within a planet seems to have its own sort of theme, which helps players build their skills in anticipation of the next incoming trick.

This consistent pacing helps Bye-Bye BoxBoy feel like it never overstays its welcome. Even though the core action is so simple, small little twists help it feel fresh level after level. And speaking of levels, the game has loads different levels for players make their way through. Each level is set on one of three planets, and each planet has eight or so areas, with each area featuring 6 or so sub-levels.

If that sounds like a lot of content, that's because it kind of is. But the game is just so forgiving that players will find themselves sliding through multiple areas in no time, wondering what new twist the next levels will hold.

In addition to crowns, which players will only be able to acquire by being both clever and frugal with their box use, Bye-Bye BoxBoy also has coins to collect. Coins are faithfully doled out at the end of each level, presumably with more coins being given out for better performances, and they can be used to purchase extras from the game's shop. Players will be able to spend their coins on things like unlockable costumes, comics, music, and even special Challenge stages, which are separate and distinct from the baseline story stages.

All things considered, Bye-Bye BoxBoy offers 180 different stages for players to conquer, which makes it a bargain considering the game's five-dollar asking price. Sure, it doesn't have all of the visual flair of other titles on the 3DS — it's notably lacking in the system's nameskake three-dimensional visuals — but the game's overall aesthetic style is extremely well-suited to its gameplay. The same can be said for the music, too, though the tracks will likely begin to feel stale well before the gameplay does.

For a way to close out the BoxBoy trilogy, Bye-Bye BoxBoy is superb. It does everything the other games did right, and nothing they did wrong. It's a simple, loveable puzzler that feels like a relaxing vacation away from the intense audio/visual bombardment that floods the game market today. The fact that it stands to be the closing chapter of a series with an indeterminate future is a little sad, but considering how well the series has done so far, it's nice to know Qbby can sign out on a high note.