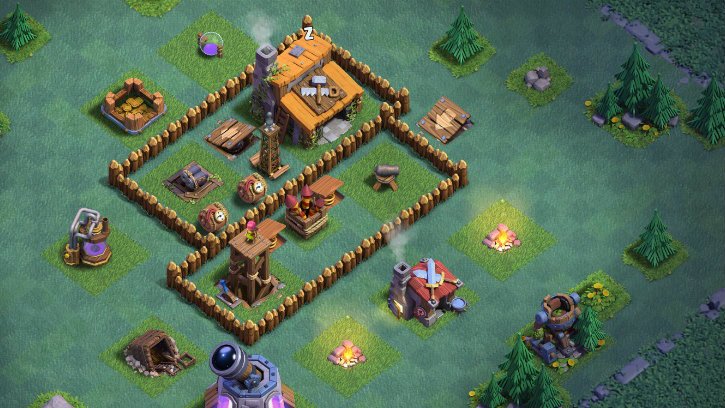 The most recent update to Clash of Clans has introduced one of the most popular features added to the game yet: the Builder Base. This new base is entirely focused around the Versus Battle, where players can duke it out in 1-on-1 online-based matches. Since the game imposes no penalty for losing online battles, players have nothing to lose and everything to gain -- and that's doubly true when it comes to building up their Builder Base. Still, not everything with the Builder Base works as expected; don't worry, though, because we've got all the crucial tips and base building stategies players need to know to find their best layout and start winning matches.

What's Changed With The Builder Base

There are some differences between the Builder Base and the previous home base players have become familiar with. One of the biggest changes to the usual formula is that there are no spells with the Builder Base -- instead, individual troops themselves have special abilities which players can find through the upgrade menu. Additionally, the Builder Base itself cannot be upgraded to the next level until all offensive and defensive buildings have been built. That might seem strange, but the upside of this restriction is that online versus matches will be more well-balanced, since players are matched up based on their overall base level. This also means that battle outcomes are not determined simply by who has the bigger, better base, but rather who has a more effective base layout.

The first step to putting together an effective Builder Base is to start winning matches. After the tutorial, players' Builder Bases should already be at Level 2, which gives them enough options to go online and start fighting. As mentioned previously, losing matches accrues no penalty against player resources, so there's no reason to get out there and start fighting.

At the beginning levels, Level 2 opponents will only have base-level troops like Barbarians and Archers, the likes of which can be easily dispatched by the cannon. As a good starting layout, players will want to place their cannon into the center of the base and then surround it with other buildings. Invading troops will try to get through the buildings to destroy the cannon, and most will likely perish in the process.

It would be inadvisable to place cannons or other defensive countermeasures behind the corners of walls, as doing so leaves them exposed to attacks from cloaked Archers. Just four archers can easily take down a cannon in this way, so it's best not to leave defensive weapons exposed.

The most effective layouts keep the Town Hall central within the entire base, with fences at the perimeter lined with defensive countermeasures. Many effective base layouts have a sort of spiral effect that funnels enemies toward powerful buildings before weaker buildings, with the strategy being that small numbers of weaker buildings can create a higher winning percentage than taking down a single big building. Lastly, the best Builder Base layouts incorporate design features inspired by other tough bases, so any player who has a particularly hard time invading a base would do well to learn a few lessons from their layout.


Clash of Clans isn't the only popular free-to-play game on the market. To find your next fix, check out our list of the Best Free To Play Games.

Developer Supercell still has plenty in store for fans of its hit tower rush title.