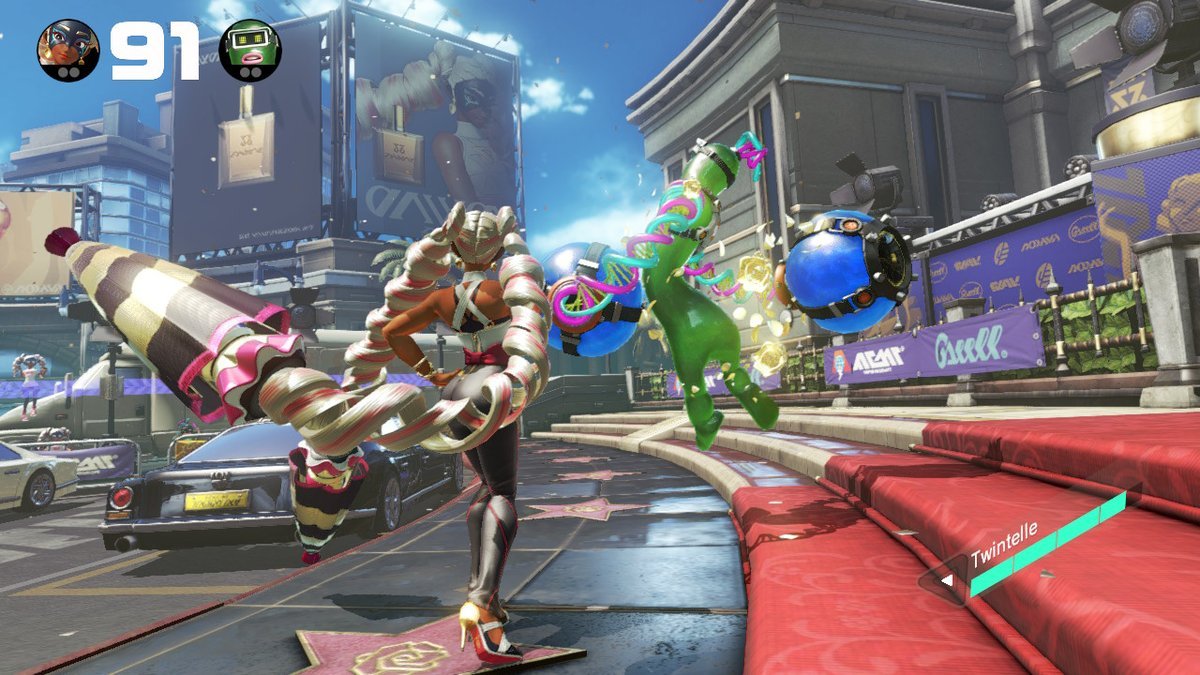 Arms Review: Reach For The Stars

The Nintendo Switch has been calling out for new and fantastical IPs of its own since its inception. It debuted with the excellent The Legend of Zelda: Breath of the Wild and an adorable puzzler named Snipperclips, but for the most part it's been relegated to port machine status. There have been sprinkles of creativity here and there, and plenty of games coming down the pipeline in the future, but the Switch has yet to come into its own. That's why Arms is such an important release. Not only is it a brand new IP for Nintendo as a whole, but it's one of the first new IPs on the Switch period.

That means it has to deliver. It has to (pun intended) hit hard. Unfortunately, while it ticks off some of the checkboxes meant for an instant classic, it ends up faltering elsewhere. The colorful fighter is rife with memorable new characters and entertaining combat, but unfortunately its longevity is a bit of an issue. For quick pops of creative matches in single-player modes or online play it excels, but for play in the long run, you might want to reach for something meatier.

Arms is all about taking fighters with springy arms (or hair in French actress Twintelle's case) and pitting them against each other in rousing fighting matches that encourages players to utilize their Joy-Con controllers like an extension of their own arms. Each match consists of a couple of rounds, during which time you're expected to knock out your opponent, obviously. That's the vanilla match, anyway, as there are other modes of play you can engage in, up to and including hoops, target practice, and more.

You can use the Switch's excellent Pro Controller, but nothing feels as natural as holding one Joy-Con in each hand to throw punches, grab your opponent, and knock them senseless. It's like the natural evolution of the Punch-Out gameplay mechanics, perfected by way of the Switch's unique controller inputs. While more traditional controller options work well too, the real attraction is motion control with the Joy-Cons. After spending time with both types, the clear-cut winner was playing with a Joy-Con in each hand. Like the Switch-exclusive 1-2-Switch demonstrated, the console is at its best when showing off its moves with quasi-motion control.

Battles are standard affairs, where you send a flurry of punches, blocks and the all-important throws where you extend your arms and grab your opponent, throwing them for a good amount of damage. You can string these together for some explosive amounts of damage, and each character has their own intriguing mixture of various arms to add into the mix. You can choose a different arm for each character on either arm at the beginning of each match, which adds another element of strategy to what might otherwise seem like just another brawler where you trade blows.

Oftentimes, your character's Arms selection can make or break each match, so you'll need to choose carefully when outfitting your fighter for each match. You can earn additional Arms for use in battle later on, and that's part of the fun of it when you get bored with what's laid out in front of you. Some characters are more about punching power or long-distance combat, and others are like making your Arms feel like they're using weapons more than having stretchy noodle-like appendages.

To get the new Arms, you'll spend your in-game currency on a special minigame. You'll have to grind through the proper game to earn said currency, however, which can be a bit of a pain. You spend your credits on "time" to play the minigame, which is a lot like the Skillshot version you can play separately. Unfortunately, you won't always get the Arms you're even looking for to begin with, so this doesn't guarantee anything other than the potential of wasted time if you grind for currency.

An Army of Options

There are several modes to play in, however. You can choose the single-player focused Grand Prix mode to complete several levels against different fighters, Versus to take on opponents, and special modes like Hoops and V-Ball which are interesting new twists on classic sports like volleyball and basketball. My personal favorite was the Skillshot mode, where you not only have to aim for targets to accumulate points, but you can reach all the way over to your opponent and knock them around a few times to assert your dominance. Or to be a jerk. They're extremely fun options, especially when you're playing with other human beings via local play or online. These minigames break up what can feel like a monotonous set of versus fights, but even then they start feeling less like fun diversions after a while and like the regular matches again.

Arms is solid all-around, from its controls to its ability to hook you into playing "just one more round." But like many fighters, it suffers from a lack of content that will keep you coming back over a long stretch of time. Like 1-2-Switch before it and the ever-excellent Snipperclips, it's reliably built, accessible and familiar, but after a few weeks of solid play unless you're a hardcore fighting enthusiast you'll likely be looking for something else to show off to your friends who haven't yet gotten a Switch. I'd love to see DLC in the future with even more wacky characters and silliness sprinkled in, because I'm all in with the Arms universe, but it would be nice to see additional content coming down the pipeline soon.