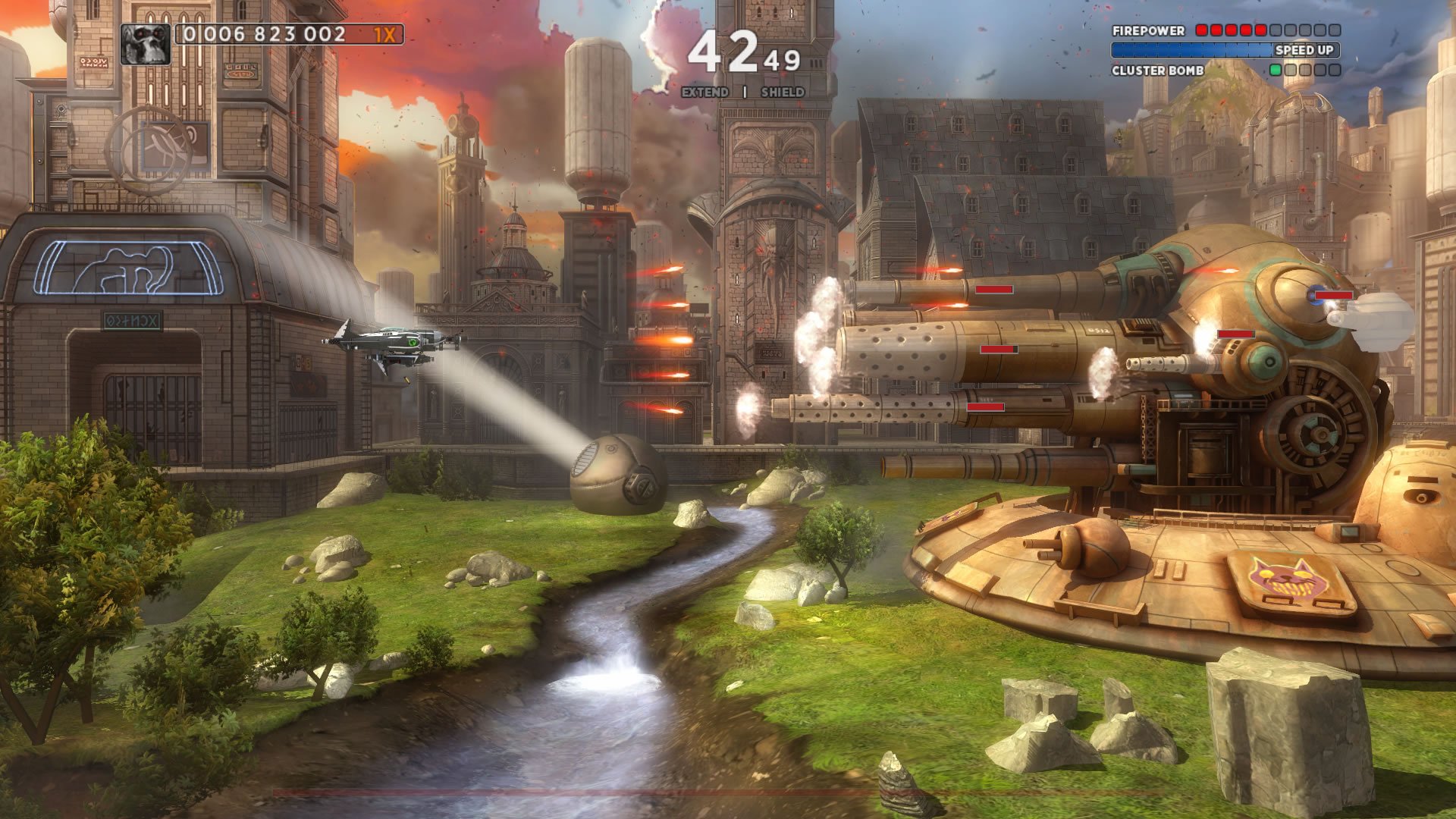 The Nintendo Switch is a console that's aiming to do things that no other Nintendo device has done before, and among those goals is an aim to appeal to older audiences. Sine Mora EX works toward this notion nicely -- it has an easily-approachable blend of shmup-style action and crisp, colorful visuals that's mixed together with an adult-oriented plot full of cursing, war, and overt references to topics like slavery and rape. Unfortunately, while such mature themes aren't uncommon in games, it is odd to see them featured in a title that is otherwise perfectly family-friendly. Though a solid title in its own right, Sine Mora EX feels like it misses its potential for broad appeal largely because of the striking contrast between its given elements.

Heavy-Handed Is Putting It Lightly

It's a little difficult to pin down just what Sine Mora EX wants to be, particularly since many of its various elements seem to oppose to one another. On one hand, the game is about as gorgeous as any shoot-'em-up can be: little details like reflections on the water, shadows of ships passing over environments in the background, and frequent swings to full-3D during cutscenes make Sine Mora EX a tour-de-force in the graphics department. These are masterful graphics, so full of color and rich in detail that they remind me of the wonder I used to feel when playing a game on a brand-new console.

On the other hand, Sine Mora EX is dictated by a narrative that is pretty confusing and exceedingly mature in nature. The game presents two intertwined stories that follow the events of the Eternal War between the Layil Empire and the Atarach Kingdom: the planet of Seol is the native home of the Enkies, denizens of the Atarach Empire and a race of beings with an inherent ability to control time, one of the primary aspects of Sine Mora's gameplay, while the invading imperials have created a technology known as The Project that grants similar temporal powers. Using The Project, the Layil Empire has begun enslaving and even executing the native Enkies, and the game picks up after the empire's genocide spawns two different rebel factions.

What follows from this setup is a complicated tale of loves and lives lost, all set amidst a world that is highly-entrenched in time travel technology. As might be expected, this means that the story can and does jump backward and forward in time to show various characters working toward a common goal. It likely goes without saying that this doesn't exactly make the story easy to follow. What's worse, the game's writers decided that an ESRB rating of Mature meant there was ample opportunity for foul language, and as such, curse words are dropped liberally throughout the script. Though cursing is common in the real world, it doesn't always feel natural in a video game, particularly one with such a clean and crisp visual style as this one, and particularly not when used with such reckless abandon.

Fortunately for Sine Mora EX, the game presents what can only be called peerless shoot-'em-up gameplay. As mentioned earlier, time is a big part of both the story and the gameplay itself. Instead of having to focus solely on their own health, players will more often than not be focusing on their remaining time. Taking hits from enemies depletes the available time to complete the mission, while destroying enemies adds to the available time. This coupled with a temporary ability to slow down time leads to a risk-versus-reward system that provides a fresh twist on the shmup genre and helps Sine Mora EX stand out from other titles with similar action.

Naturally, many other genre staples are still present. Enemies drop various items when destroyed, including bonus points and power-ups that can be used to upgrade a ship's weapons up to nine times, and special power-up weapons like gigantic lasers and gun-wielding drones help round out the offensive mix. Unsurprisingly, these upgrades aren't permanent, but the developers did come up with a nice twist to help keep them around during tense firefights: after taking a hit, a number of the player's weapon upgrades are ejected from the ship, and players have a short window in which they can reclaim them. This is yet another risk-versus-reward mechanic, and with consideration to the huge amount of enemy fire on-screen at any given time, to say nothing of the many screen-filling boss encounters, it's one that turns the game into a truly frantic white-knuckle experience.

For those who played the old version of the title, there is a fair amount of new content that the EX version of the game introduces, and all of it can be found within the Switch version of the title. Additions like local co-op, time attack mode, and new challenge modes are all present in Sine Mora EX for the Switch, and while these modes certainly help round out the overall experience, they won't do much for players who have already had their fill of the main game. With that said, the local co-op mode is of particular interest to Switch owners, as the console is uniquely suited for cooperative play; paired with the game's straightforward and easy-to-understand action, Sine Mora EX absolutely works toward the Switch's notion of being a social gaming experience regardless of current location.

All in all, Sine Mora EX is a stunning example of shmup gameplay done right. For every confusing plot point, there's a masterfully-crafted boss encounter, and for every needless curse, there are ten thousand or more incoming projectiles to dodge. Many players may like the adult-oriented plot and generous use of adult language, but others will likely feel that they're needless and distracting additions. Fortunately, the gameplay of Sine Mora EX speaks for itself, providing some of the best bullet-hell action players have seen in years.