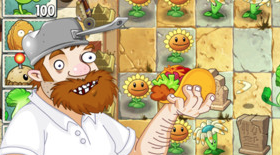 Plants Vs. Zombies 2: It's About Time Sees Early Release In Australia, New Zealand